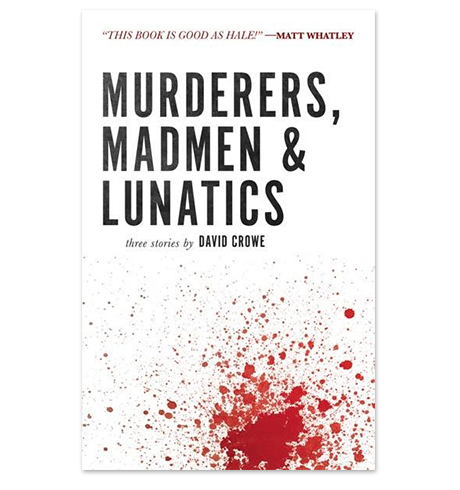 “These three stories are a comical and at times irreverent foray into the underbelly of personal injury and criminal defense law in Atlanta by a gifted writer and a first rate raconteur, who happens to also be a personal injury and criminal defense lawyer who has practiced in Athens, Georgia for 25 years. Crowe's stories introduce the reader to a wide variety of characters this type of trial lawyer might meet in his or her practice, including not only judges, prosecutors, other defense lawyers, insurance agents and police officers, but also—as the name suggests—murderers, madmen and lunatics. Even though I'd never hire Johnny Mercury, I can't wait for the next batch of stories in the series.”

About the Johnny Mercury Series

Welcome to Round 1 of the Johnny Mercury Series, Murderers, Madmen and Lunatics. Round 1 consists of three stories, “Burdens of Proof,” “Bug Man” and “Freddy B.” Johnny Mercury is an Atlanta personal injury lawyer who also practices criminal defense and is a fictitious character who makes an appearance in all the stories. Mercury has been a lawyer for over three decades and he’s somewhat sleazy, somewhat lazy and somewhat greedy—others in the Atlanta bar refer to him as an “ambulance chaser.”  The pinnacle of his legal career was when his photograph was on the back cover of the Atlanta phone book.

Mercury doesn’t play a starring role in all the stories, but instead the stories are a comical look at characters who pass through Mercury’s world in some form or fashion, many of whom, as the title suggests, are murderers, madmen and lunatics. The stories are at times absurd, at times grotesque, and at times comical. I did not want to write regular, run of the mill type stories, but wanted to do something a little different—I hope I have succeeded. The plan for the Johnny Mercury Series is to publish a new round of stories each year and I hope you enjoy the first three. Special thanks to Brian Berger for reading and commenting on my first three stories. —David Crowe

About the First Three Stories

The three stories in the book Murderers, Madmen and Lunatics, and the sundry assortment of characters in the stories, have their genesis in persons I have met during my legal career and events I have been a part of, witnessed, read about or heard about, but the nonfiction stops there. I have conflated, exaggerated and imagined each character and each story to the point where they no longer resemble even remotely any actual person or incident, but instead, conform to Johnny Mercury’s imagined reality. Any resemblance to any lawyer, judge, prosecutor, policeman, banker, beggar or thief is purely coincidence.

Burdens of Proof
“Burdens” is the story of four different characters with interlocking narratives in a time of crisis. Johnny Mercury, Rufus Johnson Peppercorn, Stevie Rainbow and Shampagne Alexander are four people who have burdens of their own that each must deal with in his or her own way. In “Burdens” Johnny Mercury must manage his first ever “million dollar case” when representing the family of a man, Wilson “The Bull” Jones, who has been hit and killed by a train. Mercury is simultaneous representing Shampagne Alexander, a young African-American mother who is charged with a crime. Will Mercury bungle the cases or will he guide his clients to a successful resolution of their issue? Of all the stories, “Burdens” is the one that introduces the reader to Johnny Mercury, and the story in which Mercury plays a starring role.
Bug Man
“Bug Man” is the story of Derek Dobrin, a successful exterminator in Atlanta who is charged with murdering a young girl while spraying a customer’s homes for pests. He isn’t accused of just murdering his 17 year old victim, but he’s charged with strangling her and then defiling her corpse, a charge he adamantly denies. Dobrin hires Johnny Mercury to represent him and the lawyer has to come up with a plan in the face of overwhelming evidence. But when his back is to the wall, Mercury indeed concocts a plan—plead insanity! Is Dobrin guilty, is he insane, or is he truly innocent?
Freddy B.
“Freddy B” is the story of a fifty-five year old banker with an aging body and an assortment of deleterious habits. Frederick Von Burkhalter, or “Freddy B” as his friends call him, has lived on Easy Street for three decades until his world crashes in around him in 2009 when the credit industry collapses, creating a global financial crisis, and his world collapses. Freddy B loses his plush, money-lending job and has to set out on a comedic quest of find employment. Though Freddy B has little or no skills, with the aid of a vivid imagination and the help of Johnny Mercury, he just might find salvation…or then again he might not. “Freddy B” is a comic romp through the world of a sloth.
Purchase Murderers, Madmen & Lunatics Purchase

David Crowe is a lawyer who practices personal injury and criminal defense law in Athens, Georgia, and has done so for twenty-five years. I have represented those charged with murder, rape, child molestation, armed robbery, aggravated assault and kidnapping. I have tried approximately 100 jury trials and have been involved in thousands of hearings of all sorts. I consider myself a “trial attorney” but so does Johnny Mercury, and I hope he isn’t mistaken for me. I am also husband, father of three girls, and an avid cyclist. To find out more about my law practice, see www.lawofficeofdavidcrowe.com.

Check out his nonfiction here.